This double smoked maple ham is perfect for the holidays, Easter, and special occasions. The leftovers are the best part because you can enjoy this glorious ham in sandwiches, soups, and casseroles!

If you are new to smoking ham, we’re here to guide you through the double smoking process. This recipe yields a delicious ham that is ideal for moderate-sized gatherings.

What is double smoking?

Double smoking refers to taking a pre-cooked, cold-smoked ham and then hot smoking to add extra flavor. This process is also called “twice smoked ham.” It is during the hot smoking phase that the ham will pick up additional smokiness, and a touch of candied coating from the pineapple-maple baste.

How long to smoke a ham:

Plan on 20 minutes of smoking time per pound of ham. So, if your ham is 12 pounds, that equals 240 minutes, which breaks down to 4 hours. Apply the ham glaze after the first hour or smoking time, and apply every hour until the double smoked ham is done.

What is the best temperature to smoke a ham?

I recommend keeping the temperature low at 225 degrees F. Of course, you can set it to 210 degrees F. and smoke it a few hours longer. If you’re new to double smoking a ham, I recommend starting at 225 degrees. Once you get the hang of it, start experimenting with lower temps.

Can you inject a ham with marinade?

Yes, you can use an injection marinade. An injection marinade used on ham isn’t as complex as those used in pork roasts or beef brisket. I recommend injecting it with apple juice or other mild fruit juices, or soda like root beer and cola. You can also inject ham with dark rum or bourbon for an added kick.

How to use an injection marinade in ham:

What are the best woods for double smoked ham?

Do you need a spice rub for smoked ham?

No, you do not need to use a spice rub for double-smoked maple ham. However, a rub will provide an added layer of flavor along with the pineapple-maple glaze. This smoked ham recipe calls for a spice rub to be applied 15-20 minutes before it goes in the smoker.

This double-smoked maple ham will be the star of the show, and we know you’ll need the best side dishes to complement your amazing meal. Here are our suggestions! 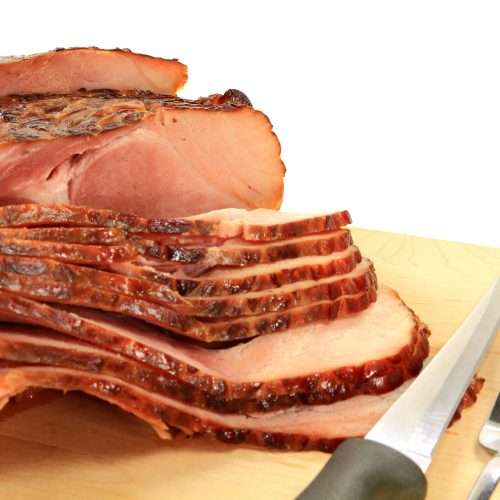 Need an Injector for the Smoked Ham with Maple-Honey Glaze?

The Ofargo Marinade Injector is a classic-style syringe. The marinade is sucked up through the needle and then pushed back into the meat. The needle on this model is large enough that it shouldn’t clog. Still, make sure that your marinade is near water-thin. It is an inexpensive unit that you can purchase for around $10. It is dishwasher-safe and durable enough to last for several years. The volume of this injector is small, but it will handle most jobs for a single family.