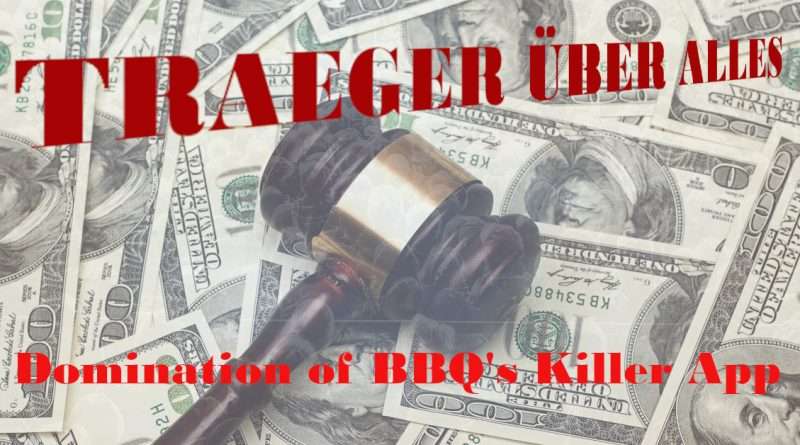 Does Traeger have a path to global domination?

The pellet grill market isn’t just competitive; it can be downright ruthless. Companies fight for dominance, credibility, and the claim of authenticity. To gain the upper hand competitively requires a lot of creativity. I know most readers will agree on product innovation, but there are other forms of creativity. Some of them take advantage of legal loopholes or just the strange way the law works.

Ultimately, for businesses that build a product, everything comes down to patents. However, most of us believe that patents, while loaded with unnecessary legal jargon, are straightforward. Invent something, get a patent, and own the exclusive rights to manufacture and sell the product. It is here that the whole pellet grill industry started. It started with a rather fantastic patent held by Joe Traeger.

After years of trial and error, Joe Traeger came up with an outdoor grill that burnt wood pellets as fuel. It wasn’t a simple device compared to other grills, but it had advantages. Joe’s patent was powerful. It stated that no one else could build a piece of outdoor cooking equipment that ran on pellets for 20 years. Traeger owned this niche in the industry from 1985 to 2005.

The Thing About Patents

However, the thing about patents is that the law rules them; and the law is not nearly as logical as one might think. Patent disputes are settled in a court of law. Sometimes before a jury and sometimes before a panel of judges. Companies may fight through to the end, or they might choose to settle. Either way, lawyers and judges decide on patents that don’t always consider the technology or history behind these innovations.

And yet, patents are powerful. IBM filed for over 9,000 patents in 2018 alone. That’s nearly 30 a day. There is nothing worse than finding out that a critical component of your latest invention is patented by someone who can hold you ransom for millions. It’s a rookie mistake that small businesses make by not patenting everything.

But patents don’t last forever (fortunately). When the original Traeger patent ran out, a dozen companies had pellet grills in development. The competition was fast, innovative, and overwhelming. Joe Traeger tried several strategies, including moving manufacturing to China to hold down costs. In 2006, a year after the patent expired and Joe in his seventies, the Traeger company, was sold to a private equity firm. The new Traeger was born.

The new Traeger had some growing pains. The company moved from Mount Angel, Oregon, to Salt Lake City, Utah. Management changed. Almost no one in the old company made it into the new one. But after a while, the new Traeger started acting like a big company. They began patenting every little detail of every product.

Included among Traeger’s new patents were two that were particularly interesting. Patents 10,158,720 (Cloud system for controlling outdoor grill with mobile application) and 10,218,833 (Mobile application for controlling outdoor grill) to be specific. In a world where patents skirt the rules of logic, these patents are for items not invented or innovated by Traeger. They are not for any type of hardware or, strictly speaking, software. These are service patents for services that already existed.

These patents were filed on March 29, 2016, and awarded on December 18, 2018, and February 26, 2019, respectively. If you have been following the pellet grill industry, you might notice that Bluetooth and WiFi connected grills were around long before these dates. Again, patents were filed after the innovation by others. However, on August 31, 2020, the Patent Trial and Appeal Board ruled that just because Traeger wasn’t the first to develop this technology didn’t mean that these patents weren’t valid.

What do these patents really say, you ask? On the basic level, Traeger claims to own the “service” that connects an outdoor grill to a wireless device. Yes, the wording is vague. That is why we have courts. This is not to be read as a claim of owning the underlying technology but the idea itself. It’s a strange claim if unfamiliar with legal and business tactics, but claims like this have been upheld before. It should also be noted that these patents and legal claims are not specific to pellet grills but much more generally aimed at any grill or smoker with any form of cloud or wireless connectivity.

On March 14, 2018, Traeger sent out cease and desist letters to several pellet grills manufacturers, including Green Mountain Grills, Rec-Tec, and Memphis Grills. These letters told the recipients to stop manufacturing and importing wirelessly connected pellet grills—kind of a bold statement—also, the sort of request that might put a company out of business.

On December 18, 2018, Green Mountain Grills (GMG) filed a suit against Traeger in the US Patent and Trademark Office, asking for the invalidation of these patents. On September 21 of 2019, this court ruled that it was unlikely that these patents could be declared valid. Things were looking up for competitors of Traeger. Of course, as I said above, that court then refused to invalidate the patents, and on November 24, 2020, Traeger filed a lawsuit against Green Mountain Grills for patent infringement.

The First to Patent

technology in outdoor cooking equipment has become the norm, and dozens of companies and hundreds of products could find themselves impacted by this case.

So, what do we know about this lawsuit? Traeger filed the case in the Federal District Court of Nevada (where Green Mountain Grills is registered). They “demand” a jury trial and seek a permanent injunction against GMG from any further violation of the named patents. Traeger also seeks restitution for damages and enhanced damages three times the amount of any losses for these patent violations. And of course, they are seeking restitution for all expenses and legal fees accrued by Traeger in pursuing this case. All in all, a virtual death sentence for GMG.

So, why GMG? Why not a larger company or a more threatening competitor? One answer is that GMG is a small company that lacks the depth of pocket that Traeger has. That makes them vulnerable. But there is one big reason. GMG filed suit in patent court against Traeger for these two patents. That means that GMG was aware of the patents and the impact those patents would have on their business. From the Traeger side of the argument, it’s practically an admission of guilt.  Of course, GMG doesn’t see it that way.

But Traeger has upped the ante. Not only are they suing GMG, but they have also filed a complaint with the International Trade Commission seeking to halt the import/export of wireless-enabled grills by GMG. Like the patents themselves, this complaint also avoids talking about the equipment and focuses on the “service” of connecting a grill wirelessly to a smart device. It is a somewhat strange move attempting to impose a trade block before an official court ruling, but it would appear that Traeger doesn’t want to waste any time.

Ultimately, if Traeger manages to win its court case, it could change the outdoor cooking industry for decades. I believe that the complaint with the trade commission is a bit of a longshot. Either way the commission rules, it will likely happen soon. The lawsuit, however, may take months or even years to reach a verdict.

The real question is what that verdict might mean. If Traeger loses, then everything will continue as it is. If, however, they win, Traeger will have a court upheld set of patents that they can then use to file suits against at least a dozen companies. Anyone who uses a wireless connection to a piece of outdoor cooking equipment might find themselves at the mercy of Traeger. I’m not saying that this was planned all along, but the path appears clear in hindsight.

Now I don’t believe that a Traeger victory will end connected grilling as we know it. Forcing all those companies to remove apps and connectivity from their products represents an onerous burden. Additionally, some of these companies have deep pockets and armies of lawyers. It could be tied up for a very long time in the courts, which would be expensive. So, perhaps, the strategy here is to force licensing agreements. Companies with the revenue would pay Traeger for the right to provide this service to their consumers.

As the cases proceed, I will add updates to this page. Depending on how long these cases remain active and what the ultimate verdicts might be, the landscape of outdoor cooking may look very different in the near future. 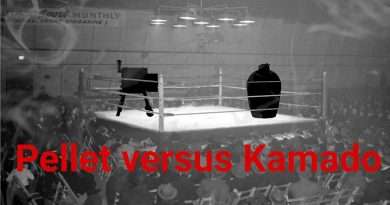 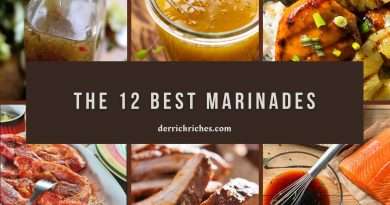 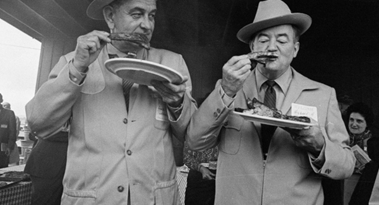