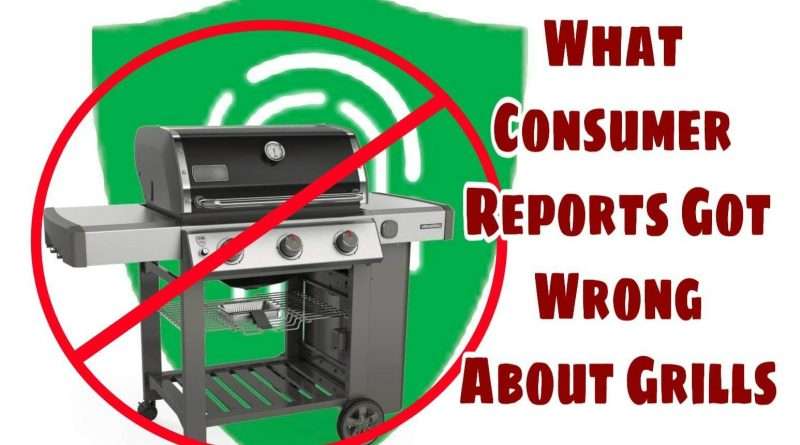 Let me start by saying that not only do I respect Consumer Reports. I strongly support what they do as a consumer advocacy group. I have used their recommendations in the past while making purchasing decisions and found them very useful. On the other hand, they have a specific methodology that doesn’t always address the diversity of the grilling community. Furthermore, it may be possible to exploit their methods. What do I mean by this? It doesn’t take much for a manufacturer to reverse engineer test results to create a product that scores well. So let’s take a look at what Consumer Reports got wrong about grills in 2019.

Consumer Reports makes much of its money selling its recommendations through their magazine and online subscriptions. They, like me, use affiliate links to generate revenue from products sold on their website. Not only would it be unethical for me to reprint their grill recommendations and reviews, but it would certainly get me into a lot of trouble. So instead I will be addressing the high points in their general recommendations as well as those appearing in their press releases and other media coverage. But don’t worry, there will be more than enough information to illustrate my points.

For those of you who don’t know, Consumer Reports sends secret shoppers out to purchase products from stores. They then take these items back to their lab for testing. Consumer Reports does 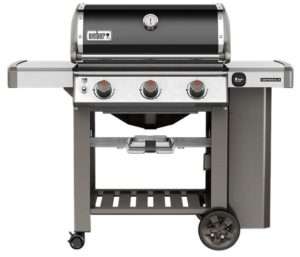 not accept free products from manufacturers nor do retailers or manufacturers know what products are purchased. In the case of grills, each is tested for evenness of heat, temperature ranges, assembly ease, indirect cooking abilities, and other criteria. This results in test scores that bode well for some but not so much for others.

Let’s start with what interested most consumers, gas grills. Consumer Reports heavily favors Weber in this area. Not just any Weber gas grill,

but all the ones they have tested which happens to be 12 of Weber’s 15 major models of gas grills. This is an impressive accomplishment for Weber, and not only a great marketing tool but a validation of their efforts as a company. But, what if it isn’t? What if it’s something else? After all, a decade ago, Consumer Reports rated Weber Grills on the list, but not at the top.

Consumer Reports rates total temperature range and evenness of heat very highly. The issue here is that the hotter a gas grill runs the harder it is to achieve evenly distributed heat. This has to do with the airflow rate through the grill, and the hotter the grill is the faster the airflow. This causes turbulence in the cooking chamber making the heat more uneven. So, how has this changed gas grills on the market? Well, it seems that Weber has consistently lowered the heat output of their grills to improve evenness. This year they reintroduced the Genesis line of grills again adding a redundant sear burner on some models to compensate for a less than impressive performance. 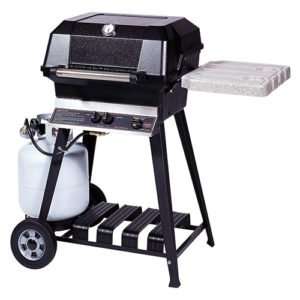 Consumer Reports acknowledges that preheat times on Weber grills are below average and you can see why. It takes longer for a lower powered grill to reach its highest temperature. Look at it this way. You can bring a pot of water to boil over low heat with a lot of time and little patience. On the flip side of the equation, gas grills with much higher heat output didn’t rank as well. Those grills can deliver the heat, they just can’t do it as evenly. The begs the question, has Weber been cutting back on the BTUs in order to perform well on Consumer Reports’ rankings?

Is Consumer Reports wrong about Weber? Not as much as they are wrong about many other grills. In fact, they don’t even list the MHP Grill–the first residential gas grill ever made. I agree that in its price range, the Weber Genesis II E-310 is a good choice. If however, you are looking for a grill that can hit higher temperatures I also recommend the MHP JNR and the Broil King Regal 420 Pro. These grills have heritage, solid construction, and power that the Weber Genesis does not.

Once upon a time, Consumer Reports actually favored less expensive gas grills. They have since come to their senses and realized that you actually do get what you pay for. Lower priced gas grills suffer from at least one fatal flaw under this kind of evaluation. Their top performing three gas grills all fall in the $500 to $1000 price range and all come from Weber. These grills are not cheap and so they’ve provided recommendations that consumers might consider more affordable. If you would like to broaden your horizons, then I invite you to take a look at my top picks for the best gas grills in this category.

It is in the more ‘affordable’ category where Consumer Reports gets into trouble. Their Best Buy pick is the Even Embers 5-Burner GAS8560AS. 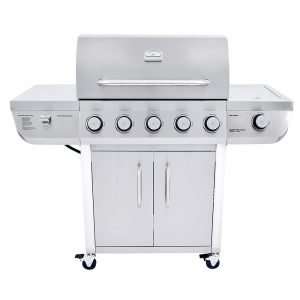 Never heard of this brand? Not surprising. It hasn’t been around very long and if my guess is right it won’t be around very long– at least under this name. Even Embers is a brand name of imported gas grills made under contract with various Chinese producers. This brand is owned by The Boltz Group, a company made up of past employees of the now defunct Brinkmann Corporation. In fact, it would take you ten minutes to drive from the old offices of Brinkmann to the new (and smaller) offices of the Boltz group. I’m not saying that this association is the reason Even Embers is a mediocre grill. Brinkmann used to be a great company and their fall was slow and painful, but they once knew how to make a great product.

Consumer Reports actually lists a few Even Embers grills as best buys. It could be as much luck of the draw as it is a situation of a poorly made grill managing to perform well on a select number of tests. The Even Embers grill comes in either all stainless (not really stainless, just shiny) and basically painted steel. This $375USD five burner grill is all “stainless” has five main burners, a side burner, measures four and a half feet wide and yet weighs in at a whopping 90 pounds. Consumer Reports gives it a mid-grade “good” rating for sturdiness. I find this a very generous score’ considering the biggest problem with this product has already been reported by its buyers. Complaints of bent and damaged panels, missing parts, difficult assembly and an utter lack of construction quality plague this grill, and those negative reviews will inevitably pile up. 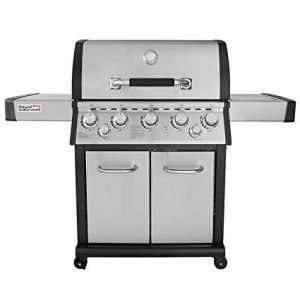 Also listed as a good gas grill from Home Depot is the Royal Gourmet 5-Burner. This $530USD grill is packed with features, but again, not a lot of quality. It is from almost every angle a ripoff of the vastly superior (and twice as expensive) Broil King Regal 490 Pro. As with the Even Embers, Consumer Reports has no data with which to report their predicted reliability or customer satisfaction scores. Royal Gourmet hasn’t been around very long either. Well, the name hasn’t been around very long. Though, The Ningbo Huige Outdoor Products Company has been around for a while making inexpensive store brand gas grills under different names. The problem with Boltz and Huige is that they tend to have quality control issues. One grill out of the cargo container might be great. The next one arrives bent and damaged. It is hard to evaluate many of these store brand or generic imported grills since no two seem to be the same.

As for grills from Lowes, Consumer Reports recommends the Weber Spirit II E-310. This is a good choice although, I would recommend the similarly priced Broil King Monarch 320 since it wields more power and cooks well. Also listed are two and three burner models of Char-Broil’s Tru-Infrared line of gas grills. Not bad choices and proof that Lowe’s carries a better selection of gas grills than Home Depot. 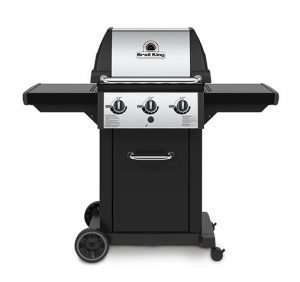 As of the writing of this article, Consumer Reports recommends the Char-Broil Smartchef grill in its list of the best grills from Walmart. Too bad the Smartchef was discontinued. Actually, it isn’t a bad grill but though, it was never a very good grill; just a bit ambitious. The Smartchef was Char-Broil’s attempt at a WiFi enabled ‘smart’ grill. It worked sometimes for some people on certain days of the week. Char-Broil has managed to distance themselves from this grill though they should take some pride in at least giving it a try.

Also at Walmart, Consumer Reports recommends the two burner Weber Spirit. Not a big surprise there. They chose the RevoAce four burner, which is a shame. Basically, it is a disposable grill that is priced to throw away. At $170 you would think that you couldn’t go wrong with this selection, but you actually can. It can ruin more money in meat than the grill costs.

And on to Charcoal 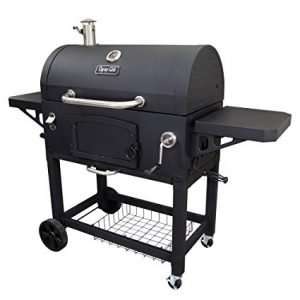 It isn’t a surprise that Consumer Reports lists the Weber Kettle 22 as the best charcoal grill on earth. Everyone else does. I do. To some, this is the only answer that needs to be given, but the truth is that there is a wide variety of charcoal grills out there including the simple kettle, the kamado or the gaucho. Once upon a time, we used to talk about barrel grills. These were a mainstay of backwoods barbecue when unused steel barrels piled up from the oil trade and turned into simple charcoal grills. Consumer Reports seems to think that this is still a viable category when they point out the Dyna-Glo Premium Charcoal Grill. This grill is an inexpensive unit, but one that fits a need that almost no one has anymore.

From here they wander into the deep waters of kamado grill controversy and steadily side with Kamado Joe over Big Green Egg. They lean this direction, not because of the grill itself but the features that Kamado Joe has to offer. Think what you will, they have a point. It really isn’t with these two brands that I take issue. It is their lower priced option that I can’t agree with. Selecting the Vision Professional as ‘also excellent’ is strange. This kamado grill is loaded with features that are supposed to make it better but actually cut away from the core abilities that make a great kamado grill. Though not the Swiss Army Knife that the Vision is, the Broil King Keg 2000 is the same price (around $700USD) and made of metal. It is portable which is actually a great feature and far better built than the Vision. The Broil King Keg is ridiculously efficient and capable of doing everything that a well built kamado cooker should be able to do.

Why trust me? Where do I get off correcting the most trusted name in product recommendations? I could say that I spend 52 weeks a year with grills, while their staff hits on it for a week or two. That 22 years of experience doing this puts me in a unique position to evaluate grills of all types. I could say a lot of things. In the end, you trust me or you don’t. I won’t say I don’t care, because I actually do. I just hope that you consider what I am saying before you go shopping. 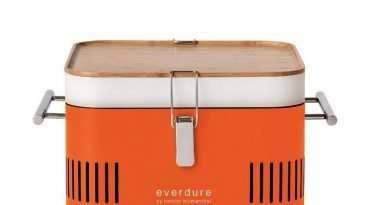 Everything Wrong with Good Housekeeping’s Best Gas Grills of 2019 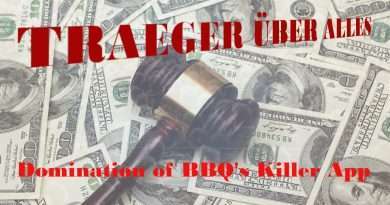 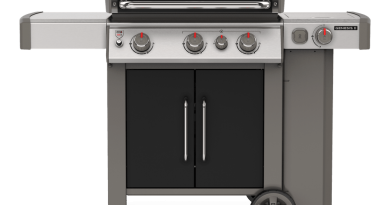 4 thoughts on “What Consumer Reports Got Wrong about Grills, 2019”

You haven’t lived until you’ve tried a good southern comeback sauce. It’s the sister of Thousand Island dressing and