Pellet grills are hot. Okay. Not as hot as most other grills, but they are selling better than ever before. And now, you can’t be a grill company without one. For the Summer of 2019, Broil King introduced their Broil King Regal Pellet Grill line. Weber would follow suit shortly after. There has been a pellet grill race and no one wants to be left out. Yes. Broil King rushed their pellet grills (there are two sizes) to market. There are reviews out there that reflect problems with the smart device app as well as the software that operates the grill. These issues have now been resolved.

This is a solidly built pellet grill. Certainly, it commands a higher price point, but it is heavier and more solid than most of the competition. While many comparable pellet grills have lightweight lids and bodies, the Broil King Regal 500 pellet grill has 14-gauge construction (that’s 2 mm thick) and a double-walled lid. This unit holds in heat. It has too. The pellet system on this model is designed to reach cooking temperatures of 600 degrees. Furthermore, it is designed to do that in the middle of a Canadian winter. That makes this one of the most powerful pellet grills on the market.

But wait, there’s more. Broil King loves engineering and features. So you get a full rotisserie system with the Broil King Regal Pellet Grill. You can smoke roast whole chickens easily. I know that a rotisserie on a pellet grill seems a little odd, but it does have uses. I would strongly encourage any owner to give it a try. The results are better for many larger roasts and whole poultry.

One feature I do like about this grill is how easy it is to clean out the firepot. A rotor breaks up the ash and lets it fall through into a small tray that simply pulls out. You don’t have to remove the main diffuser plate to clean out ash and now you don’t have an excuse to do it. And the grease collects in a tray for easy disposal. You can even completely clear out the hopper to change pellets or for storage.

Broil King spent a lot of time engineering their pellet grills. During this process, they decided that a smaller pellet (smaller diameter) would work best. This isn’t to say that the Broil King Regal Pellet Grills can’t use other manufacturer’s pellets, but it will work best with the Broil King brand. Now, most companies that make pellet grills and pellets would rather you used what they made, but I find this to be a bit of a problem. Broil King’s smaller pellets don’t get caught up in the auger as easily. While this grill has a powerful auger that can chew through jams, it will be noisier with larger pellets. It should present a problem for you, but it is worth noting.

Broil King took time to think this grill out. It took a while to get the software working. This is an excellent pellet grill. It comes in 26 and 32 inch versions. Both have great capacity. The price ranges are higher than a lot of the competition, but most of the competition doesn’t have these features or quality of constructions. This pellet grill was designed to hit 600° F during a Canadian winter. It can perform so much better than any of the cheaper pellet grills. If you are looking to buy a pellet grill, I really recommend taking a serious look at the Broil King. 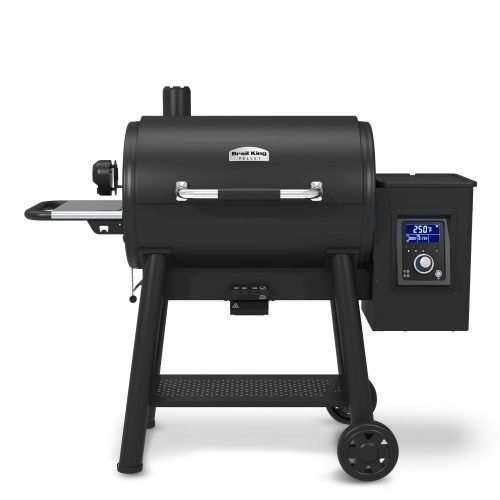 Broil King has been in the barbecue business a long time. With pellet grills becoming the most popular type of cooker on the market, Broil King has jumped in with both feet. They have done this with two lines of grills, the lower-priced Crown series and this, the pricier and impressive Regal series. Broil King loves features. Most all of their products are packed with them.

The Regal Series pellet grills come with full rotisserie systems, something unique to this type of smoker. They have also added in an ash cleanout and full WiFi capability. Their app started out a little weak but has improved with time. The bottom line here is that these are very good pellet grills that have excellent performance. I mean, these grills hit 600° F in the cold. Broil King is after all a Canadian company and they build their products to cook through those winters.

I encourage you to take a serious look at one of these pellet grills. Yes, they cost more than most, but they have the features, quality, and support to make them worth the price.